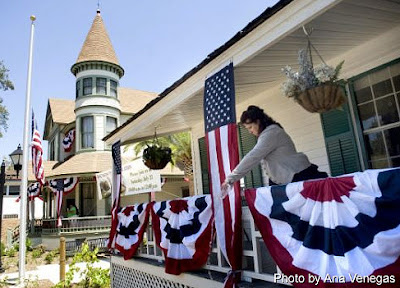 If you missed the Anaheim Historical Society's big Citrus Celebration at Founders Park this past weekend (as I was forced to), there's still a chance to partially redeem yourself. Tomorrow, Saturday, Oct. 1st, Anaheim's historic Founder's Park, at 400-418 N. West St., will hold an open house from 9am to noon. Costumed docents will be on hand to lead tours and share information on the historic homes. The event is free, although donations to help support school tours are always appreciated. It appears this open house thing will be a regular occurance on the first Saturday of each month. (That's the same schedule as the open houses at Santa Ana's Victorian Howe-Waffle House, so you could make a day of it!)

Did I mention the Anaheim Historical Society now has a blog? Well, they do. So go look at it already!

Those of you who have been involved in one way or another with the Old Orange County Courthouse during the past three decades probably know the curator of the Old Courthouse Museum, Marshall Duell. He has been there since the 1980s when the building reopened after a major retrofitting. Marshall has announced that he's retiring in October. If you plan to stop by to say farewell, you might want to call him first -- I understand he broke his arm and may be out for a couple days. 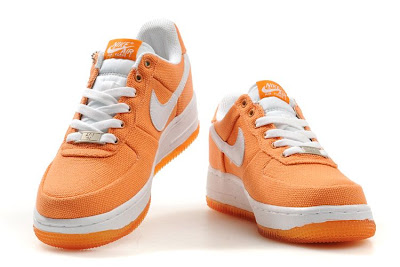 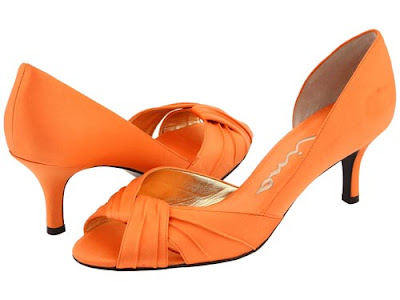 How To Wear Estate Jewelry or Not Your Grandmother's Pearls

Pearls, as we all know come in a variety of sizes.
So...what is the correct size to wear?

Our favorite pearl expert at  Passage des Perles blog addressed this question today
She likes her classic pearl strand in size 9 mm and larger,
and agree with her that larger sizes are appropriate for women of a certain age
like me.

I like all pearls, the classic single, double and triple strands as well as opera length.
Who doesn't?
Some my find them boring, but I don't.
But that's not to say that I don't also adore pearls used in edgier more contemporary jewelry designs
such as this Tahitian Pearl negligee pendant necklace 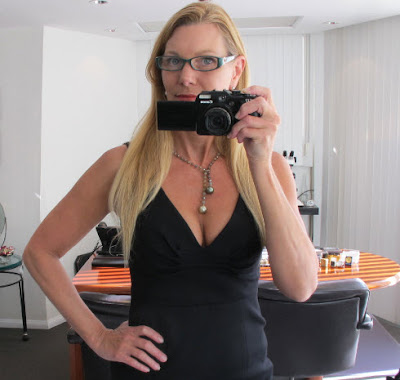 Here's the close up 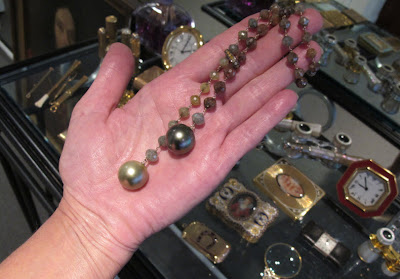 The necklace is designed with faceted fancy colored diamond beads from which two large Tahitian pearl drops (16 mm), hang unevenly and thus the name negligee...as if this was the base of a bow tied loosely.
Totally wearable or over the top...
What do you think? 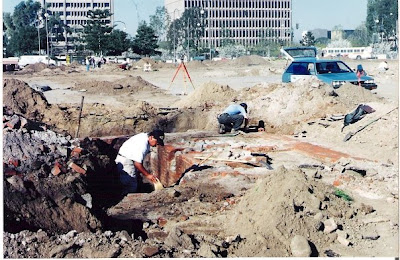 In the "Comments" section of my recent post about the fate of Santa Ana's historic Lacy Neighborhood, our pal, archaeologist and frequent reader Douglas McIntosh, wrote, "I hope that with the destruction of this neighborhood, that someone has considered the fact that there is the strong possibility that there may be numerous sub-surface features and artifacts that may be encountered and destroyed by earth moving activities.
"Considering the age of some of the structures that Chris wrote about, back yard features such as privies, burn pits, cisterns, wells,storage rooms etc..could be exposed when grading and leveling work is carried out in this region. Nearly all of the above listed features were encountered and examined when pre-construction work for the Ronald Reagan Federal Building [on the other side of Downtown Santa Ana] was carried out in the 1990s.
"...In taking a second and third look at your photos, I believe there should have been both an architectural historian and an archaeologist on site during all of the earth-moving work associated with moving these structures."
Doug's message includes some excellent points. It also reminded me that Doug long ago sent me photos of the dig at the Reagan Federal Building/Courthouse site (CA-ORA 1030H). Now might be a good time to share those photos on this blog. The exposed brick in the photo above is the basement of an 1870s-80s newspaper office. (The Santa Ana Blade?)

All these photos were taken in 1995. The one above shows Tony Sawyer, Steve Dies, Carol Schultz , Kam Slater, and Scott Campbell toiling in the mud of the spring rainy season. The photo below shows Art Ruelas holding up a ceramic jug found in a privy feature. 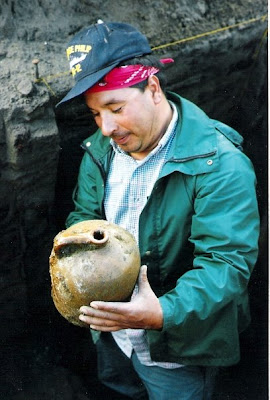 Doug writes that they found, "hundreds and hundreds of [artifacts]. I should scan and post photos of some of the artifacts. Many bottles, ceramics, personal items. The photo is of the excavation of a former printing shop. We also excavated a hotel foundation and church foundation, Victorian era backyard dumps and privies. Fun stuff."

This last photo, below, shows Doug himself, finding a creative way to get the right vantage point to photograph the site. 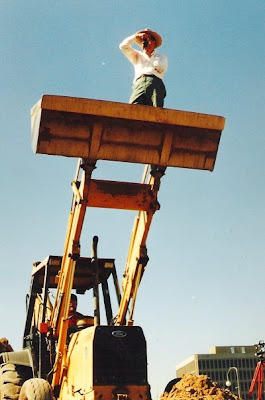 Britney Spears  is an American recording artist and entertainer. Born in McComb, Mississippi and raised in Kentwood, Louisiana, Spears began performing as a child, landing acting roles in stage productions and television shows. She signed with Jive Records in 1997 and released her debut album ...Baby One More Time in 1999. During her first decade within the music industry, she became a prominent figure in mainstream popular music and popular culture, followed by a much-publicized personal life. Her first two albums established her as a pop icon and broke sales records, while title tracks "...Baby One More Time" and "Oops!... I Did It Again" became international number-one hits. Spears was credited with influencing the revival of teen pop during the late 1990s.


In 2001, she released her third studio album Britney and expanded her brand, playing the starring role in the film Crossroads. She assumed creative control of her fourth studio album, In the Zone released in 2003, which yielded chart-topping singles "Me Against the Music", "Toxic" and "Everytime". After the release of two compilation albums, Spears experienced personal struggles and her career went under hiatus. Her fifth studio album, Blackout, was released in 2007 and despite receiving little promotion, it spawned hits "Gimme More" and "Piece of Me". In 2008, her erratic behaviour and hospitalizations caused her to be placed in a conservatorship. The same year, her sixth studio album Circus was released, with the global chart-topping lead single "Womanizer". After embarking on The Circus Starring Britney Spears, she released greatest hits The Singles Collection, which featured U.S. and Canadian number-one single "3".
Spears has sold over 100 million records worldwide, making her one of the best-selling music artists in the history of contemporary music. According to the Recording Industry Association of America (RIAA), she is the eighth top-selling female artist in the United States, with 32 million certified albums. Spears is also recognized as the best-selling female artist of the first decade of the 21st century, as well as the fifth overall. She was ranked the 8th Artist of the 2000–10 decade by Billboard. In June 2010, Spears was ranked sixth on Forbes list of the 100 Most Powerful and Influential celebrities in the world; she is also the third most mentioned musician in the world.