Aloha to the Royal Hawaiian 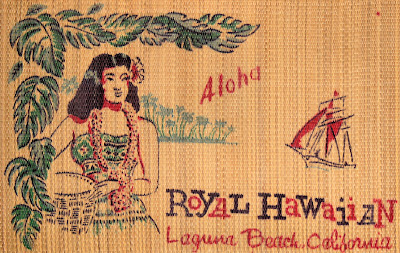 After 65 years, the Royal Hawaiian -- one of the last Polynesian/Tiki themed restaurants in Southern California, one of the oldest restaurants in Orange County, and a Laguna Beach landmark -- closed yesterday. Francis Cabang opened the Royal Hawaiian at 331 N. Coast Highway in 1947 and members of the Cabang family ran the place until 2006 when it changed ownership and underwent a major remodel.
I'm sad but not entirely surprised that the place closed. The key reasons given for the closing are the economy and high rent, which makes sense. But a number of major changes since 2006 probably didn't help either. Prices went up, the amazing and enchanting jungle village decor all but disappeared, their lapu-lapu shrank (a common problem when reaching age 65), and it was not uncommon for meals to be accompanied by modern rock music rather than something from the islands. Stu News Laguna is reporting that another key cause of the closure was the city cracking down on how late live music could be played. Of course, it wasn't that long ago that the place didn't have live music at all.
But even the watered down Royal Hawaiian was far better than no Royal Hawaiian at all, and it will be missed. 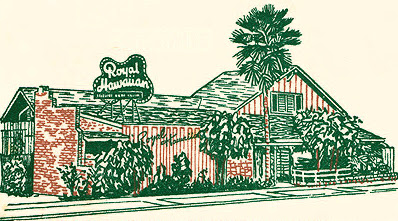 There are articles about the restaurant's closure in both the L.A. Times and the O.C. Register.
The placemat at the top of today's post is from the late 1940s and was given by Royal Hawaiian owner Junior Cabang to the guys at Oceanic Arts in Whittier. The illustrations of the restaurant immediately above and below are from the late 1940s or early 1950s. I wish I had photos of the old interior. It was  truly remarkable. At one point, the place was so popular that a second Royal Hawaiian was opened in Anaheim. It stood at 1025 S. Los Angeles St. (now Anaheim Blvd). 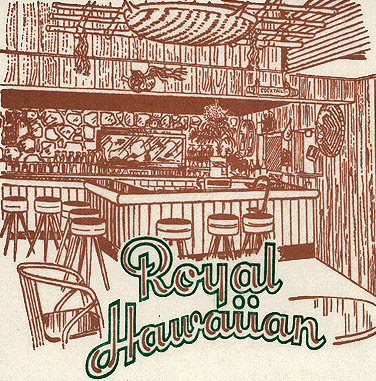 The Royal Hawaiian's Facebook page reads, "It's with heavy hearts that we announce the closing of a Laguna Beach icon. After 65 years of business we served our last lapu lapu last night. We can't express how much gratitude we have for all of our guests, regulars and staff who have supported us."
The photo above shows two of the tikis by carver Andreas Bumatay that stood in front of the restaurant prior to it's remodeling in 2006. The photo below shows the Royal Hawaiian's back bar after the remodel. It was probably the most visually interesting bit of the new stuff. 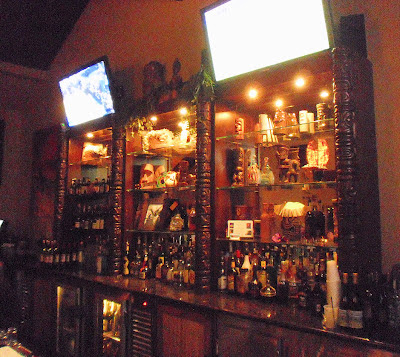 It's getting more and more difficult to get an authentic fix of Mid-Century tiki style in Orange County. Don the Beachcomber's (the former Sam's Seafood) in Sunset Beach and Disneyland's Enchanted Tiki Room are just about all that's left. (And the Disney version, while delightful, was always pretty,... Disneyfied.)

Like those "doomsday preppers" hiding guns and canned food in their lead-lined cellars while waiting for the apocalypse, perhaps I need to build my own authentic tiki room -- Insurance against the sad day when Orange County's last vintage tiki torch is snuffed out.
Newer Post Older Post Home