New local history books from all over O.C. 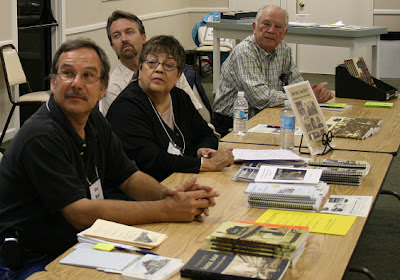 Hear the authors of the latest Orange County history books discuss their work, and then have a chance to meet them, buy their books, and have the books signed at the Orange County Historical Society's annual “Authors Night” program, Thursday, April 12, 2012, 7:30p.m., at Trinity Episcopal Church, 2400 N. Canal St., in Orange. (The photo above is from Authors Night a few years ago.) Here’s a look at some of the authors and books scheduled for this Thursday: 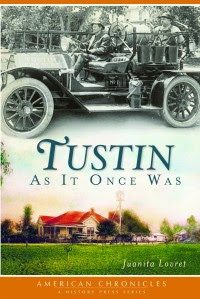 Tustin As It Once Was by Juanita Louvret: In an era when the heart of Tustin was the intersection of Main and D, folks flocked to town to get supplies and swap stories. Some of these stories featured Tustin notables like C.E. Utt, who tried his hand at every local crop; Sam Tustin, whose Buick touring car became the town fire truck; Big John Stanton, who formed the one-man police department; and Dr. William B. Wall, who found inspiration for his orange crate label in a rooster painting from Grover Cleveland. Drawing from her Tustin News column “Remember When,” third-generation Tustin resident Lovret recalls Tustin’s small-town ranching roots. 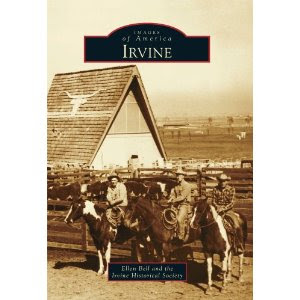 Images of America: Irvine by Ellen Bell: This author and her family have lived in Irvine for more than 20 years. Most of the photographs in this book are from the collection of the Irvine Historical Society. Bell also writes the local travel blog, SoCal Day Tripper. On the OCRegister.com sports page, she is known as “The Afternoon Angel,” and writes about her passion for Angels baseball. She is a contributing writer for Orange Coast Magazine, OC Family and Orange County Register Travel. In a recent Register interview, she wrote, “History gives us a sense of community. …In a time of constant change, history is not self-sustaining. It takes effort to keep it alive." 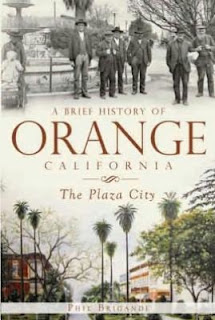 A Brief History of Orange, California: The Plaza City by Phil Brigandi: Orange started small but grew big on the promise, sweat and toil of agriculture. Born from the breakup of the Rancho Santiago de Santa Ana, its early days were filled with horse races, gambling and fiestas. Citrus was the backbone of the economy for more than half a century, though postwar development eventually replaced the orange groves. Historian and Orange native Brigandi traces the city’s roots back to its small-town origins: the steam whistle of the Peanut Roaster, the citrus packers tissue-wrapping oranges for transport, Miss Orange leading the May Festival parade, and the students of Orange Union High celebrating Dutch-Irish Days. 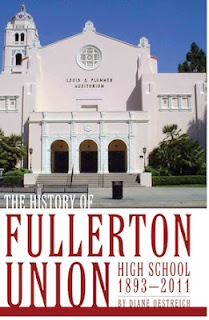 The History of Fullerton Union High School 1893-2011 by Diane Oestreich: The story of one of Southern California's oldest high schools is captured by Diane Oestreich, who looks at her alma mater (Class of 1964) and former workplace (she was the school’s teacher librarian from 1994 to 2010), from a variety of perspectives. The book examines the early days of Orange County and the growth of the school and community during its 118-year history. Topics include notable faculty and alumni, the Mission Revival campus, clubs and organizations, student activities, and an overview of curriculum. A chapter on athletics looks at various sports, facilities, and leagues over the years. 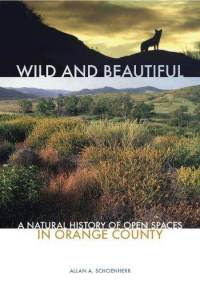 Wild and Beautiful: A Natural History of Open Spaces in Orange County by Allan A. Schoenherr:
Dr. Schoenherr’s new book explores the natural history of the creatures, plants, habitats, and landscapes that constitute the open spaces in Orange County. The Register described his book as, “packed with facts and stunning photos of wild land, habitat and species, as well as full-color maps. There are sections on climate, weather, seasons, wildfire, geology, earthquakes and the subtle intricacies of the tidal zones. And Schoenherr carefully untangles the web of federal, state, local and private wild land to make sense of the many overlapping jurisdictions.” Schoenherr is a retired Professor of Ecology from Fullerton College, and has written extensively about California’s natural history. 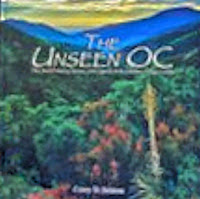 The Unseen O.C. by Corey Schlom: "In southern California's smallest county, there are some places left that few have ever seen," writes Orange County native Corey Schlom. "These places tell real stories and reveal incredible history... places that are awe inspiring." Young Mr. Schlom, who has run his own photography business since high school, has now photographed some of those corners of our back country and complemented them with local history and legends in his new book. 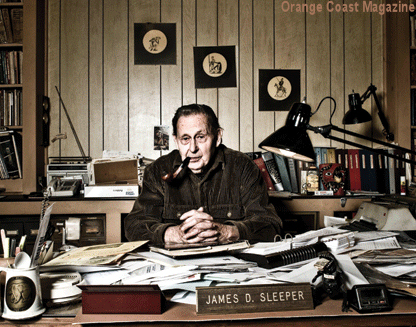 Jim Sleeper: Orange County’s favorite historian, Jim Sleeper has also been invited to attend. Whether or not he can be there, his books will be available for sale. Jim has been exploring O.C.'s back country and writing since he was fourteen years old. He also spent two years in the Army Air Force, eight in college, six as a reporter and script writer, ten with the Forest Service, and four as staff historian for the Irvine Co. He also served as historian for the Rancho Mission Viejo Co. and a consultant to both the Register and the Los Angeles Times. Since he began freelancing in 1969, he has written eight books and more than 500 articles. Jim will sell and sign copies of his Third Orange County Almanac of Historical Oddities, the first volume of Great Movies Shot In Orange County, and whatever earlier titles he may have stored away.

By my count Author's Night should provide you with AT LEAST eight books to buy, and certainly, some of the authors will bring copies of many of their earlier works for sale as well. And then you'll need to get extra copies as gifts for your friends and family.

You may just want to bring a pack mule for the trip home.