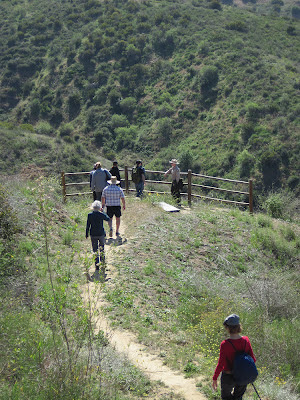 Today's photos were all taken by Phil Brigandi at this past weekend's Orange County Historical Society "History Hike" amid the remains of the historic oil fields of Olinda (now part of Brea). According to O.C. Historical Commission plaque #50, "On this site, Edward L. Doheny drilled the first oil well in the Olinda field in 1897. Olinda #1, drilled to 806 feet, pumped about 50 barrels per day (bpd). By 1898, ten wells were drilled, some producing up to 100 bpd. In 1899, the Santa Fe Railroad built a branch line to the oil field, and the settlement of Olinda was founded..."

The photo above shows some of our group at one of the old wells. One of the stops on the trek was Olinda #1, which is the oldest still-producing well in Orange County. The photo below shows the group's stop at the Olinda Oil Museum, which is located in an old Field House (1912). Olinda native Jack Smith shared some of the museum's artifacts and shared how they were used in the oil fields and town. 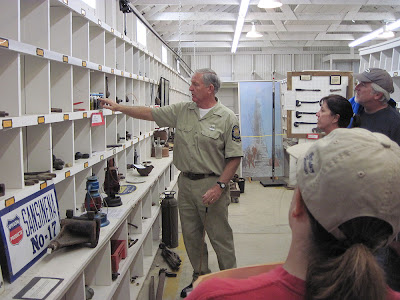 OCHS' "History Hikes" to (or through) historic sites are held at least a couple times each year. Watch for the next one sometime in Fall.

I've heard rumors, but now it's official. Ray Rast, Professor of History at CSUF's Department of History, and his wife, Veta Schlimgen, Director of the Brea Museum, have been offered excellent jobs at Gonzaga University in Washington State and will be on their way at the end of this semester. Both did great local history work while they were here. We were hoping they'd stay, but we wish them well in their new adventures.

“80th Anniversary of the Festival of the Arts” will be the topic at the Laguna Beach Historical Society’s meeting, May 8, 7:30pm, in the City Council Chambers at Laguna Beach City Hall, 505 Forest Ave. Speakers include Sharbie Higuchi, Dee Challis Davy, and Dan Duling.