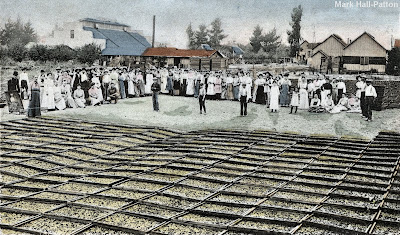 The apricot was brought to the New World by the Spaniards and was grown in the gardens of the missions. The first records of notable commercial production of apricots in California appeared in 1792. Today's photos both show apricots being dried in Santa Ana in about 1905. The image above comes from the postcard collection of Mark Hall-Patton. The image below comes from the Heritage Museum of Orange County.
.
Apricots were a major crop in early Orange County. In 1910, we shipped 1,700,000 pounds of dried apricots. And plenty more were eaten fresh.
.
Even the pits turned a profit. Notably, they could be turned into quality charcoal that was especially good for gas mask filters during World War I. 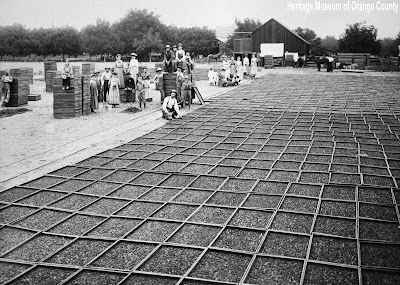 Often, farmers planted both apricots and walnuts (another locally popular tree crop of the day) on the same ranch. Perhaps the alternating harvest seasons made this a good pairing: Apricots are picked in late spring and early summer, while walnuts are harvested in the fall.
.
After picking, most of the apricots were cut in half, pitted, sprinkled with sulphur as a preservative, and left on racks (like those seen above) to dry in the sun. Dried apricots kept well and could be shipped easily.
.
In those days, historian Phil Brigandi tells me, "cuttin' 'cots" was a common (if not popular) summer job for youngsters.
.
How big was the apricot in Orange County? In 1920 (hardly our peak year) we had more than 39,600 apricot trees here. In 1919 Santa Ana alone was still churning out about $200,000 a year in apricot sales -- Big money in those days.
.
Today, about 95% of all apricots in America are still grown in California, but production has moved north. Not a single commercial apricot grove can be found from Coyote Creek to Camp Pendleton.
Newer Post Older Post Home