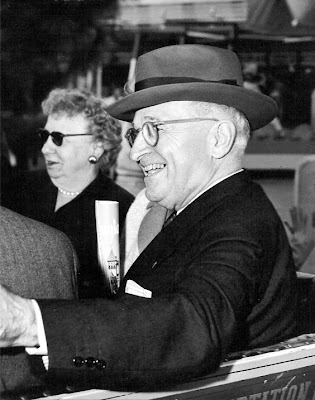 In honor of Presidents Day, I thought I'd post a little photo essay on U.S. presidents who have visited Disneyland in Anaheim. Of course, not all of them visited while they were in office, but we can excuse them if they were a little busy at the time.
.
Today's first photo, above, shows Harry and Bess Truman cruising down Main Street, U.S.A. in 1957. It's said that he would not go on the Dumbo ride, because of his aversion to "Republican" elephants.
.
It seems Truman and his entourage didn't have to stand in lines, and that they moved at a good clip, experiencing most of the park's high points in under two hours. The L.A. Times reported, "For the most part, Mr. Truman headed the parade of sight-seers, breasted only by one or two of the brisker-walking park officials and politicians. Mrs. Truman and other members of the party often trailed far behind." 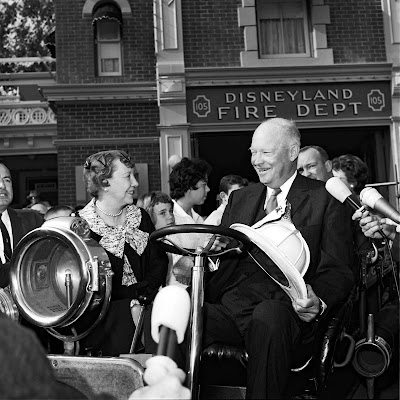 Next we see Dwight D. Eisenhower, Mamie, and the rest of his family aboard Disneyland's firetruck in Dec. 1961. Ike got to take the wheel of the "Yangtze Lotus" on the Jungle Cruise and admired the Mark Twain steam boat.
.
"You kids enjoy the wilder rides," he told his grandchildren. "Grandma and I are going to rest."
.
They retired for a while to Walt's apartment, above the fire station. All told, the Eisenhowers spent about six hours in the park. Film footage of his visit is available online.
.
The photo below shows Senator John F. Kennedy at Main Street Station in Oct. 1959 with the President of Guinea, Ahmed Sékou Touré. Kennedy was on a speaking tour in California at the time. Touré was on a three-day visit to Southern California -- part of a tour of the United States he was taking at the invitation of President Eisenhower. 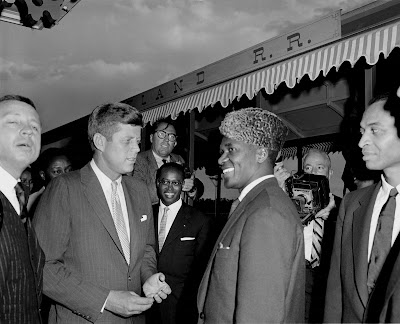 It doesn't seem that L.B.J. ever visited Disneyland, but that may be just as well. His regular drunkenness, constant swearing, and public groping of women may not have fit in too well with the park's squeaky-clean image.
.
Richard Nixon, however, was a big fan of Walt's park and made numerous visits over the years. He went on most of the rides, from Snow White's Scary Adventures to the Submarines to the Matterhorn. In the photo below, from the 1960s, Nixon takes his daughters, Julie and Tricia, on a ride down Main Street. (Clearly, the Republicans had some special fondness for the firetruck.) In 1959, then-Vice-President Nixon and his family also helped Walt Disney dedicate the new Disneyland-Alweg Monorail system. 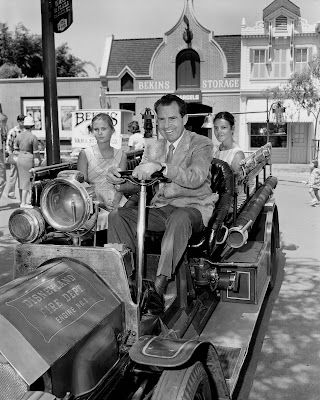 Disney Archivist/maven Dave Smith says Gerald Ford visited Disneyland, but I can't find any dates or photos of it happening. The newspapers do show him visiting the Disneyland Hotel in 1965, when he was House Minority Leader, and again in 1974 as Vice President. We can only hope he took time to walk across the street and enjoy the Jungle Cruise or Pirates of the Caribbean. 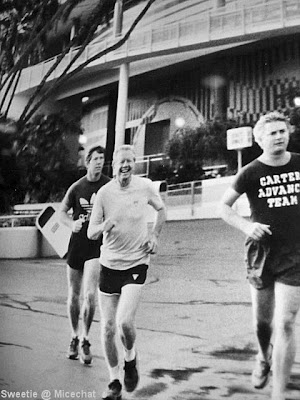 Jimmy Carter stopped by one morning before the park opened to jog around the park. Sort of seems like he missed the point. The photo above shows him jogging past the America Sings building, which now houses Innoventions. 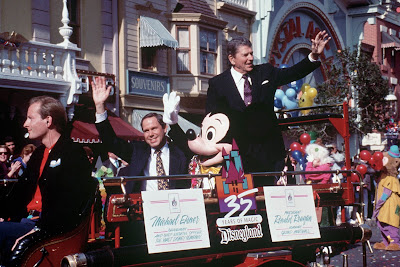 Like Nixon, Ronald Reagan visited Disneyland numerous times. His first visit was as host of the live television broadcast of Disneyland's grand opening, in July 1955. He would return again in various other capacities, including as Governor. The photo above shows Reagan in a parade down Main Street with Disney CEO Michael Eisner in 1990. Reagan gave a speech to kick off the park's 35th Anniversary Celebration that day.
.
George H.W. Bush also visited Disneyland. The photo below is from an event in Sept. 1988, when he was still Vice President. He also visited the Disneyland Hotel for various events over the years. 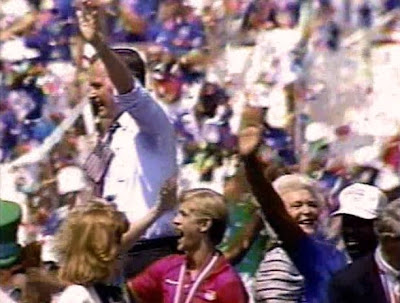 I haven't found any substantive evidence that Bill Clinton, George W. Bush or Barack Obama have ever visited Disneyland. (Although "Dubya" visited Knott's Berry Farm before Disneyland even existed.)
.
In short, it seems that American Presidents are less and less familiar with Disneyland as the decades roll on. Few of them visit at all, and those who do are more frequently there just for the publicity. At the very least we should make our leaders go on Mr. Toad's Wild Ride once or twice -- just so they know how Washington makes us feel.
Newer Post Older Post Home