Around Town - Keeping Up With Kristopher at the Soho House 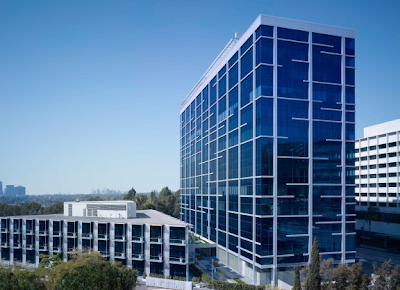 It's hard for me to keep down the smug this week after lunching with lifestyle blogger, tech guru and girl about town, Kristopher Dukes, at the uber exclusive private club, the Soho House.

The Soho House is situated in the renovated former private penthouse of architect Charles Luckman on the Sunset Strip in West Hollywood.
According to Luxist.com
The building is a Sunset Strip classic, 9200 Sunset's three-story 50,000 square-foot office building was built in 1964 and the 14-story high rise was built in the early 1970s both by renowned American architect Charles Luckman. Luckman is a fascinating figure, not just an architect but a business man who was named the president of the Pepsodent toothpaste company in 1939 at the tender age of thirty and later became the president of Lever Brothers. After helping to plan the Lever Brothers' New York skyscraper, Lever House, he rediscovered his childhood love of architecture, resigned the presidency of Lever Brothers, moved to Los Angeles and began a second career in architecture. Luckman's firm went on to design the Prudential Tower in Boston, Madison Square Garden in New York City and the NASA Manned Spacecraft Center in Houston.
After the Lever House and the Prudential Tower, it isn't surprising that Luckman was behind some of the most famous buildings in Mid-Century Los Angeles
including this famous landmark restaurant at the center of LAX that he designed with Paul Williams 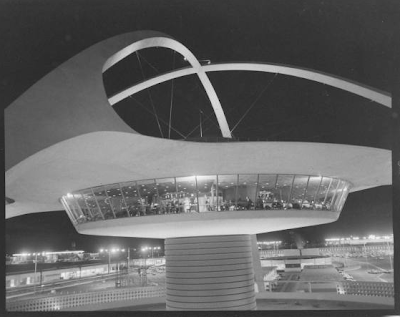 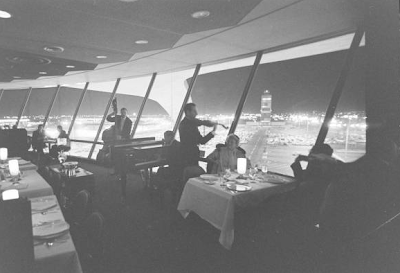 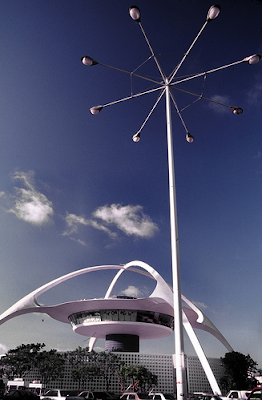 At any rate, Luckman's former 1970's penthouse home, with its 360 view from the snow covered mountains behind downtown LA to the Pacific Ocean, is an amazing place for the Soho House.
After valet parking in the subterranean garage, I took a private elevator to the lobby which was decorated in subdued style except for being dominated by a huge center marble staircase. 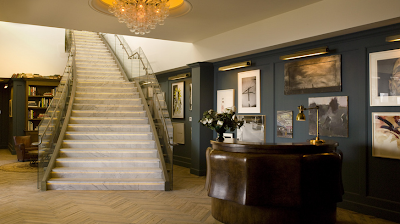 Upstairs, there was an interior bar and restaurant and a open air glassed walled garden restaurant complete with mature olive trees and sunken pools with water lilys. 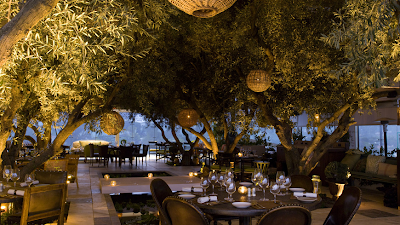 This is the photo of the garden room from the Soho House website.  Beautiful isn't it?
I would have taken a photo of my lunch with my iPhone, but there was a strictly enforced no photography policy.
Given the fact that the members are primarily from the film, media fields and creative industries, the no photo policy allows them to relax without worrying about seeing their photos show up on TMZ the next.
As expected the hip factor was way high,
with surrounding tables filled with agents, actors, fashionistas and gallery girls,
but the service was excellent and the food was delicious.
Is the exclusive club worth joining?
If you are a celebrity or public person and you want somewhere to hang out where the paparazzi and the hoi polloi won't bother you, certainly.
For a non entertainment type, maybe...assuming you can acquire the required recommendations by two Soho House members and come up with the annual membership dues.
Great food, breathtaking view, cool crowd...it just might be worth the money.
BHB blogging will be off for the next few days as I will be out of town.
But as usual, I will be reading all of your blogs.
Newer Post Older Post Home