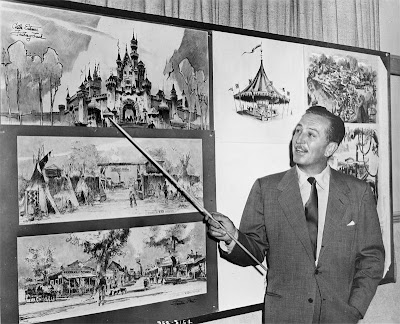 I love "before and after" photos. They're a fun and effective way to look at changes to a place over time.
.
I'm also fascinated by old "concept art" and enjoy comparing it to what actually was or wasn't built. (The 1920s concept art for an unrealized addition to the Old Orange County Courthouse is a great example.)
.
And I also dig Disneyland, which, as architects like Charles Moore and Alan Hess have pointed out, is one of the most important works of architecture of the 20th Century.
.
Combining those three things, I'm launching a sporadic series of posts that will feature various scenes at Disneyland: First, as the designers conceived it (1953-1955), then as it appeared when first built, and finally as it appears today. Let's start with the park's entrance,... 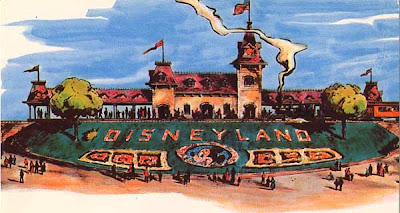 Technically, the image above is advertising art rather than concept art -- But it still shows what the train station and entrance were supposed to look like before anyone knew quite how it would turn out. The obvious change here is the floral Mickey, which has been through various iterations, but never ended up as a side-on view. What's less obvious is what's behind the viewer: A huge and innovative parking lot that has now been turned into a second theme park. 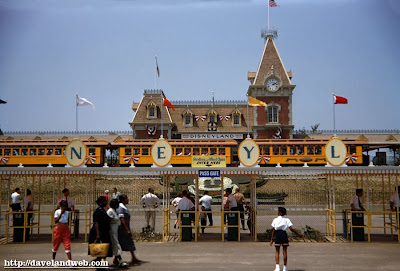 Like most of the "early" photos in this series, this 1950s view comes from Dave at the wonderful Daveland blog. (I knew I wouldn't get very far with this project without access to his amazing photo collection.)
.
It appears the entry turnstiles have migrated farther away from the train station over the years, providing for increased traffic flow. Note also how the trees and other landscaping have filled in over the years. 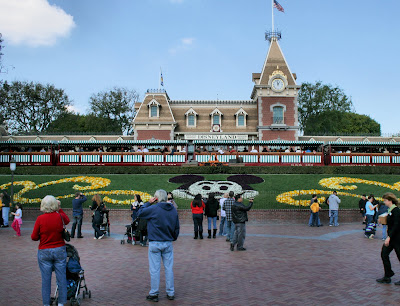 So far, I've only spent one day in Disneyland shooting "after" photos. But already, a number of big differences from the 1950s have become obvious.
.
1) People and visual clutter: There are a lot more guests milling around than there used to be, which effects everything else. More vending carts have been rolled out to provide food and drink for the thundering herds. More trash bins have been set out. And fences have been placed around landscaping, to keep it from being trampled into oblivion. The end result is a lot of visual clutter that really detracts from the intended "suspension of disbelief" as one strolls into the worlds of the past, the future, and fantasy. As much as I love churros, I don't remember rows of portable outdoor vending carts in any Fairy Tales or stories of the Old West.
.
2) Landscaping: The trees and other plants have filled in dramatically in the past 56 years. The huge stands of trees in Frontierland, for instance, are beautiful, even when viewed from the parking structure across the street. And certainly the Jungle Cruise and Adventureland are more convincing with lush vegetation everywhere. The landscaping ranges from excellent to occasionally breathtaking (especially in spring). But there are a few locations -- like the main path into Frontierland -- where the landscaping (beautiful as it is), conflicts with the original intention of wide open space.

3) Strollers: Yes, there have always been some baby strollers at Disneyland, but now there are THOUSANDS and THOUSANDS of them, and each one is roughly the size of an SUV. Many areas of the park that were once very scenic are now enormous, ugly, stroller parking lots. Why? If your child isn't yet self-propelled, it's unlikely that he or she is getting much out of the experience. Wait to take them until they're old enough to appreciate it -- Or at the very least bring a smaller stroller that won't cause traffic jams.

4) More attractions: There's much, much more to see and do at Disneyland than there was in the 1950s. This is sort of amazing when you consider how little land the park actually sits on.

5) Guests' appearance: People used to dress up more for everything than they do now, but Disneyland guests seem to have slipped more than most. Looking back at photos from the 1950s and 1960s, the guests were a pretty clean cut bunch. Today, many guests dress like they just stepped out of a trailer park in a episode of Cops. There must be a happy medium, folks!
.
Anyway, look for these changes and others as this series continues -- interspersed among my other posts -- in the coming months.
Newer Post Older Post Home